One sunny day last summer a clutch of collectors and a mess of mechanics paraded 150 of their prized possessions on the streets of Grande Prairie to celebrate 100 Years of Transportation.

Sixty years ago GM offered a 265ci (cubic inch), 165hp (horsepower) V8 motor in the ’55 Chevrolet. By then Ford’s legendary flat head V8 had been in use for over 20 years. Bootleggers hopped it up to outrun the revenuers during prohibition. If you don’t remember Hot Rod Lincoln by Commander Cody, YouTube it and enjoy. Nobody wrote a song about a six-cylinder Chevrolet. 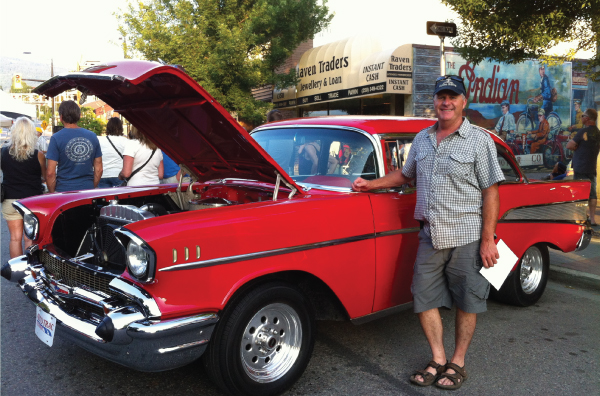 Sixty years ago GM offered a 265ci (cubic inch), 165hp (horsepower) V8 motor in the ’55 Chevrolet. By then Ford’s legendary flat head V8 had been in use for over 20 years. Bootleggers hopped it up to outrun the revenuers during prohibition. If you don’t remember Hot Rod Lincoln by Commander Cody, YouTube it and enjoy. Nobody wrote a song about a six-cylinder Chevrolet.

Two model years later GM focused on performance and appearance. The stellar result was the iconic ’57 Chevy. The wide grill, hooded headlights and jet-age fins created an eye pleasing form with lasting appeal. A larger 283ci V8 was offered with either a two-barrel or four-barrel carburetor. The four-barrel 283… floor it and the extra two barrels open sucking riders into their seats and the gas tank dry. Add the optional limited slip differential and dealer installed four-speed floor shift transmission and the 220hp ’57 was unbeatable on the strip, and the street, until the muscle car era in the 60’s.

The ’57 Chevy was and is popular with hot-rodders, dragsters, racers and collectors. Dale acquired a two-door sedan that started life as a homely model 150 with a straight six engine and ‘three-on-the-tree’ column shift manual transmission… basic transportation. The most treasured ’57 Chevy is the much prettier two-door hardtop Bel Air coupe. But the sedan, with its center doorpost, has the strength needed for Dale’s plan.

The plan started with a frame off restoration, a 350ci V8 and beefed up drive train. Dale prettied up the exterior with Bel Air trim including stainless swooshes on the tail fins and Chevy’s wide gold V on the hood and trunk. “I installed the Bel Air trim at the primer stage to get the placement correct, then removed it because I didn’t want to take the chance of scratching the final paint job,” Dale said. About all that is left of the original 150 is the glass, sheet metal, back seat and some suspension components.

Dale used a 400 crankshaft to up the displacement to 383ci creating a real sleeper. This fuel-injected stroker puts out a whopping 425hp. When not in sleeper mode Dale mounts street legal slicks and heads to the drag strip, uncorks the headers, and has some Sunday fun. “You have to be able to hear your own engine when you’re drag racing” says Dale. Quarter mile stats: 13.5 seconds, 105 mph.

Those of us exposed to this vintage of car remember arms aching after parallel parking, even with the leverage of their gigantic steering wheels. We called it Armstrong power steering. So Dale has added creature comforts including power steering, smaller steering wheel, stereo sound system (hidden by the original tube-type radio facade), six-CD changer, air conditioning and reclining seats. Dale’s ’57 is safer too with seat belts, disc brakes, collapsible steering column and LED tail lights. 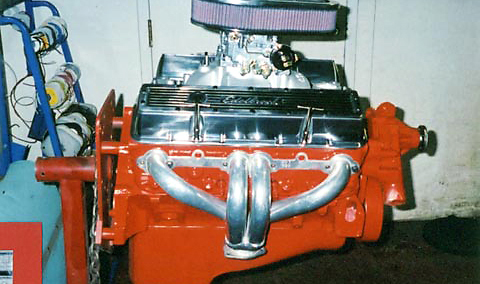 It’s hard writing this article without mentioning Dale’s many classic-car contributions to the Rotary Car Lottery; his enthusiasm for people and skiing, being one of the founders of the ski school now a part of Nitehawk Recreation Area; his ongoing passion for restoring classic vehicles, six of which he currently owns; all while raising a family and running Auto Trac Alignment Ltd.

Dale and a bolt of his buddies are planning a vintage vehicle voyage down Oregon’s coastal highway next fall just for fun and, says Dale, “the ’57 is going”. What better way to celebrate 100 years of transportation. 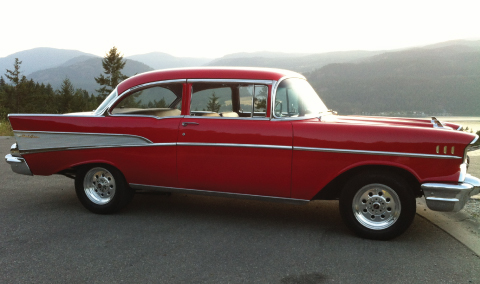 Dale Carlson—owner of Grande Prairie’s Auto Trac Alignment Ltd. and classic-car enthusiast—purchased his 1957 Chevy Bel Air in July of 2002. For details and pictures of the Chevy’s “restification,” see autotrac.ca. imageDESIGN worked with Dale to create AutoTrac’s logo and branding, which features the 1957 Chevy Bel Air. 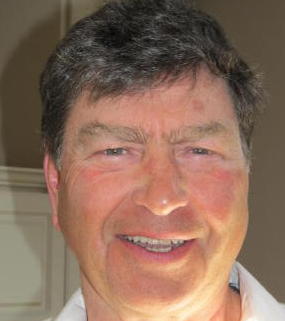