Think Inside the Box – Caileigh Reid

With a theme of “time”, Caileigh Reid’s short story Think Inside the Box took 1st prize in the Grade 10–12 division of the 26th edition of the Muriel Collins Writing Contest.

Read her winning story below:

Henry had never liked old people, well, that wasn’t quite true. It wasn’t that he didn’t like them, it was that he always felt sad for them. Whenever he saw them he wanted to cry. Henry supposed he just felt bad for them. You know, not being able to run or go down the slide and all. And they always looked sad. Henry’s father used to take him to senior homes to volunteer, they would play games and read stories, but Henry hadn’t gone lately. His father was on vacation in Afan- Agaf- Afgan- Anyways, he hadn’t seen his daddy in a while now.

His swing creaked as he kicked at the sand. Henry loved the playground; he would stay all day and all night if his mum would let him. He would scramble on the monkey bars until the blisters on his hands popped, he would rub his legs raw from sliding down the fire pole, and acquire splinters from the old wood which Henry was convinced poked right through his hand. In all his seven years he had never come across a playground that was as perfect as the one he was at now, and he would never give up a chance to play on it.

Except today. Today, Henry was thinking to the capacity of his little, growing brain. With eyebrows scrunched up and a fierce stare at the ground he was on the verge of a major scientific breakthrough. Or so he thought, for in children’s minds ants are dragons and bumblebees magic. Without warning, Henry jolted to his feet and ran as fast as his short legs would allow. He stumbled through the sand, hit the pavement, and then was off around the corner.

2 blocks straight, a left, then the third house on the right. The blue house, Henry’s favourite colour. He stomped up the front steps and charged through the door.

“You don’t have to yell, I’m right here.” His mother said wearily, standing beside the fireplace looking at where his dad’s dog tags hung. Special men had brought them to her, and she had said that Dad sent them home so that they would never forget him while he was away. “You’re home early.”

“I have something important that I need to do.” Henry puffed up his chest proudly.

“And what’s that?” His mum offered a small smile.

“I can’t tell you.” Henry turned and ran up the stairs leaving her to only guess what he was up to.

Already a plan had formed in his mind and he wanted to get to work as fast as he could. Henry crashed into his room and stopped, immediately spotting what he had been looking for. There, in the middle of the floor, what used to be a giant cardboard box, was his rocket ship. In his eyes it towered high, at least five hundred feet. It shone like a freshly polished Hot Wheels car and had one trillion horse power. On all four sides there were toilet paper roll rocket boosters that ran on strawberry Kool-Aid powder. Henry could fit inside his rocket ship, where he could steer through space with the wheel and press the super-speed buttons on the dashboard. It was the last thing that Henry and his father had done before his dad had to leave, but it had a higher calling now, Henry was sure of it.

In his arms he gathered glue sticks, Batman scissors, sparkles, tape, crayons, streamers, markers, old popcorn, and anything else in his room that would stick. He got to work. Henry started by dismantling the control panel in his rocket ship, he would have to rewire the whole thing for its new, special job. He worked diligently for over seven hours (more like thirty minutes but who’s counting?) before he finished.

Henry stared at his creation, a grin crossing his face. It was perfect. It was awesome. He excitedly put it on and started on his journey, but already Henry could see a problem. Actually, he couldn’t see at all. He carefully put the box back on the ground, grabbed his scissors, and cut two holes in the side. Henry crawled back in. When he stood up he was wearing his invention, it came down to his knees.

Henry managed to get through his bedroom door and down the stairs without falling. He snuck past his mum in the kitchen, and out the front door (he had managed to poke three fingers out and grab a hold of the doorknob). It had been a while since he had walked this way and could only hope he remembered the path. It took him several wrong turns, a few incidents of running into fences, and an unfortunate meeting with a very hungry feral cat, but despite it all, he arrived. An overgrown sign stood tall on the front line. Sunny Oak Senior Home.

Henry walked up to the door, suddenly scared. Poking a finger through one of the jagged holes, he nervously pressed the buzzer. A middle-aged woman in flip flops opened the door. You can imagine what she found. A trembling box with eyes and legs, loose glitter raining down to form a circle around it.

She waited. “Can I help you with something?”

The box nodded, “I’m here to visit, I brought a present.”

“Um,” She hesitated, “ok, follow me.” She held the door open awkwardly and the box waddled past.

“What’s your name? My name’s Henry.” The box said.

She led Henry to the lounge, where many of the residents were talking, reading and doing other various activities that they do.

Olivia cleared her throat, “Everyone, I would like to introduce Henry.”

Everyone looked up from what they were doing to see the newcomer, many smiled and more laughed.

“Henry is going to be visiting for a little while and has brought something that he would like to share with you all.” This earned Henry many curious gazes. “Henry,” Olivia turned to the box, “Would you like to explain now?”

Henry carefully laid down on the floor and wiggled out of the box. He stood up and shook his head, spraying sparkles everywhere.

Henry beamed and pointed at the box. It had knobs attached to it and various buttons stuck out, dinosaur stickers were littered across the box and the streamers taped to it flapped in the breeze coming through the open window. Henry turned the box around to show that scrawled across the front in purple crayon was:

There were lots of laughs now. This encouraged Henry further, he turned one of his dials to a label that read ‘Lots of Years Ago’, turned to the seniors with a big smile and said “Who wants to try it first?”

The laughing stopped. Looks were exchanged between each of them, clear looks of ‘you go first’, glances that Henry didn’t catch nor would he understand. Finally, a woman with curly white hair (which reminded Henry of curly fries) stood up, glared at everyone else and carried her cane like a weapon as she walked over to Henry. She circled around the box like a vulture before settling beside Henry.

“This is an extraordinary machine, young man, how does it work?” She inquired.

Henry’s face lit up, “I’m glad you asked!” He went through a detailed explanation of EVERY piece on his machine and what EVERYTHING did. He talked about EVERY little thing, right down to the sparkles (which, in case you were wondering, was where the magic came from). Henry went over this explanation every time someone new came up to his invention, and it became increasingly more elaborate every time he told it.

After the junior inventor gave the lecture, it was time for the demonstration. Henry would get the test subject to sit down, comfier the chair the better, then he would put the box on their head. Pressing buttons, saying magic words, making ‘time machine’ noises, Henry would get the machine to do its thing. After he took the box off of the subjects head he would tell them their new age, ranging anywhere from six years old to fourteen.

As the afternoon wore on so many of the residents were coming to try Henry’s machine that a line up began to build. Everyone was excitedly chatting to each other about what they were going to do with their youth, what they wanted to eat, where they wanted to go.

“I can’t wait to go roller skating again, do you remember watching the roller derby, Rhonda?”

“I wouldn’t mind tasting good old Bill’s gelato one last time. Boy, did he know how to cook too.”

After they had their turn with the time machine, each and every person walked away with a spring in their step, a youthful glint in their eye. It was as if the machine had actually worked.

When Henry finally left the centre, the sun was setting and everything was bathed in a fiery, dragon orange glow. He was proud of himself for making everyone happy. He was never going to be sad for old people again now that he had his machine. Forget superhero or firefighter, Henry wanted to be an old person when he grew up. Actually, he wanted to be one right now! When he got home, Henry was going to give himself wrinkles.

When he walked in through his front door, his mother ran to greet him. She didn’t care that his sparkles mixed with the flour on her apron from long forgotten cake batter. She had just come back from searching every playground in the city and had never been so distressed than the thought of losing Henry too.

She smothered him in kisses, “Long enough,” She said in between, “I don’t know when our clock will be stopped, and I’ll never have enough time with my little man.”

“Mum, I can fix that!” Henry grinned. “I have a time machine!” He pointed at the forgotten box on the ground.

Each year the Grande Prairie Public Library encourages writers both young and old to explore a theme in a short story for the Muriel Collins Writing Contest. When the contest is done, the winning entries are bound into a book, the cover of which is designed by imageDESIGN. Those wishing to try their hand at this year’s theme of “wild” can enter before March 1st at the library or online. 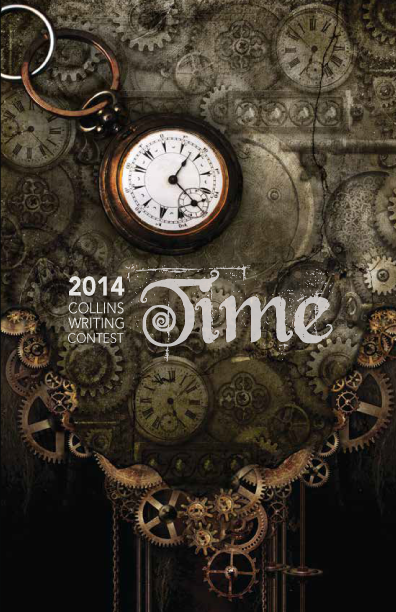 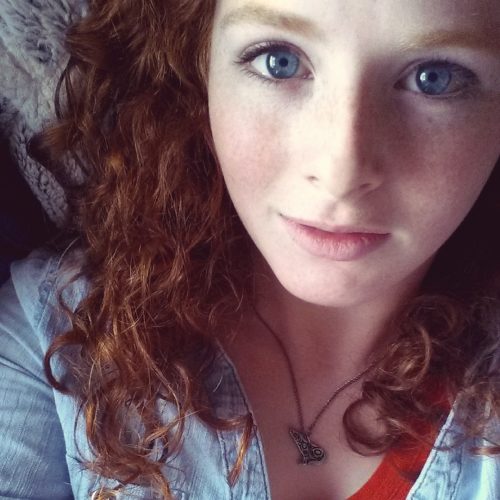 Caileigh Reid was born in British Columbia but grew up in Grande Prairie where she picked up the habit of writing, and hasn’t been able to shake it. Now, she can be found writing notebooks full of fiction and eating Nanaimo bars at the library.