French Immersion: Why Wouldn’t You?

An Interview with École Parkside’s Students, Parents and Staff

It’s early morning on Canada Day and I am interviewing my nearly-10-year old neighbour, Ryker Sargeant. Generally animated and enthusiastic, he’s admits to being tired today, having been kept awake by last night’s celebratory fireworks. Still, Ryker answers all my questions with ease, as his parents, Tammy and Ben, sit nearby, hardly understanding a word yet beaming with pride. That’s because our entire conversation takes place in French. Ryker attends École Parkside, where every day, from morning greetings onward, announcements, assemblies, student-teacher and student-student interactions happen en français. I’m thinking: what a gift this is to be sharing on our country’s birthday.

Asked how he thinks Grande Prairie Public Schools’ only full French immersion program compares to regular education, the oldest of the three Sargeant children replies matter-of-factly: “It’s like the other schools, only they just have [French as a second language] classes. We speak French all the time except during recess.”

Ryker shares that he likes school and that Parkside has “very good teachers who can even be funny sometimes.” He has no problems doing homework, despite the fact that his parents cannot help him. “It’s easy,” he says nonchalantly of his daily academic routine. Why does he think it’s worth learning another language? He shrugs, as might most children his age. He hasn’t given it a lot of thought, not having had any other experience to compare it to. “It’s fun. It will help me if I go to France one day.”

When Tammy was looking into school options for her children, she’d heard good things about Parkside, and was eventually sold on what she felt would give them a broader, more inclusive, learning experience.

“I remember [Parkside Vice Principal] Ginette Pele speaking about how focused [immersion] children are; that in order to understand the teacher, they have to look, and watch, and listen.” Tammy thought that this alone would help develop skills that would benefit them throughout the years. 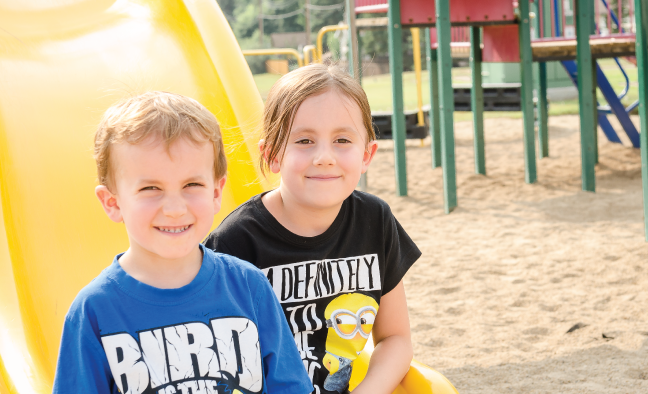 Still, there were concerns. “It was a bit stressful that they would not be taught any English until Grade 3. But then, because of all they’d learned about making sounds with letters, and other reading strategies, it was no struggle for Ryker. He just picked up an English book and read.” And this came before he’d reached the third grade.

Ben, who was initially skeptical about their kids being taught another language, says today: “I didn’t see the importance. But I am so impressed with how they’ve learned.” (Daughter Bronwyn is entering Grade 3 and son Rowan, Grade 1). “I see it as a huge asset for life. Now, when I think of how many people speak several languages, I realize we who have only one are in the minority.” These days, both Ben and Tammy reply to friends asking why they would put their child in a French program, “why wouldn’t you?”

Paul Therrien, Parkside principal, says 99 percent of the school’s parents do not speak French. He’s familiar with their concerns, and assures them the second language aspect of the child’s academic needs will not pose the obstacles they fear. In fact, Therrien has seen an increase in the number of students coming in whose educational needs require special programs, and who score surprisingly high on language acquisition.

“I ask parents: Do you want your child to be successful in an English language or a dual language program?” The steeper learning curve involved in acquiring a second language lasts until late Grade 2 or Grade 3, when the child “takes off,” Therrien explains. When English is added in the third grade, students are almost caught up English-only peers by the end of that year, and “by Grade 4 or 5, they have surpassed their English counterparts.”

For Parkside parents Crystal and Bill Kirkham, having no French was not a deterrent when considering sending their two children to the school.

“I’d heard it was not an issue, and figured they wouldn’t know the difference,” Crystal explains. “It would open an opportunity in the end, work wise and travel wise. Also, I did a little research and found that kids who are bilingual develop better overall learning skills.” 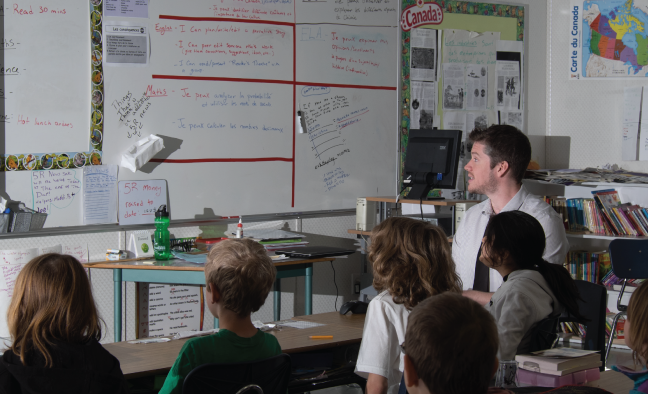 Not only is the Kirkhams’ lack of French not an issue, Crystal “cannot believe” the pace at which her children have acquired the language. Her daughter Lauren, who enters Grade 2 in September, eagerly awaits her chance to speak to me in French.

“It’s so much fun,” Lauren tells me unabashedly. “We have nice teachers who make up games to remind us to speak French.” She explains that incentives like trading pins or necklaces motivate students to communicate with each other and teachers in their new language. The results are evident in Lauren’s own facility with French, having only completed Kindergarten and Grade 1.

“I started reading in French at school and at home, and then I learned to read in English [at home]. I like working hard, and like doing math and art in French.”

Lauren’s little brother, Reid, has just completed Kindergarten. He clearly understands my French questions, but only bows his head and smiles. As his mother and I return to conversing, he heads over to the window, and starts pointing out and naming various knickknacks. His mom repeats his French words, as she has now learned many of them as well.

“For them, it’s the way school is,” Crystal says of the immersion program. “They both love it. If they were going to have struggles, I believe they would have them regardless.”

Shelly Pruden is very hands-on regarding her two daughters’ learning. She and husband Jake had their oldest, Makena, in an English kindergarten class when their need to feel part of something inclusive brought them to Parkside.

“We had toured two schools when we met with [Parkside Vice Principal] Ginette, and just talking to her, we knew before were done that it was the school for us,” Shelly says.

Ten-year-old McKena tells me, in French, that she thinks a second language has helped her develop ways to tackle new experiences. Learning strategies for new vocabulary, or problems, in both English and French “have helped teach me to think, and will probably help me later, when I am older,’ the Grade 6 student notes. She loves social studies and phys ed, and thinks having two languages is “really great.”

Her chatty younger sister Ella, who is entering Grade 3, tells me that although she does read English books at home, French is still easier at the moment “because I know which letters make which sounds.” She loves math, and social studies and music. “I would tell anyone to come to our school,” Ella says. “It’s a good thing to learn a second language.” She has no trouble finding all she needs to say in French.

Shelly and Jake sit quietly listening to the girls. “We wanted an engaged community,” Shelly says. “Parkside has surpassed all expectations. And when I listen to them speak to you, it just makes me smile.” 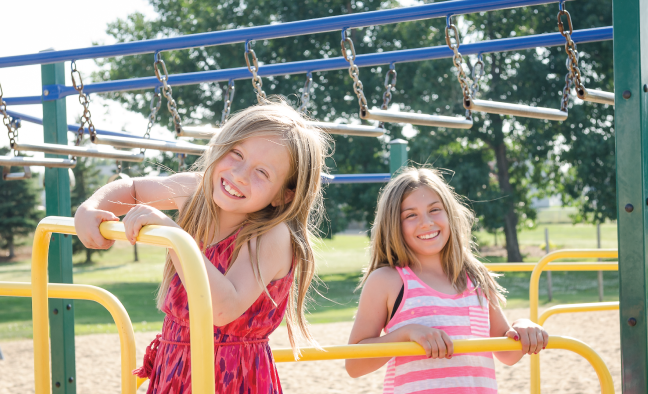 When École Parkside wanted to create a fresh look and brand for their school, they came to imageDESIGN. We also work with the Grande Prairie Public School District each year in designing their school magazine! 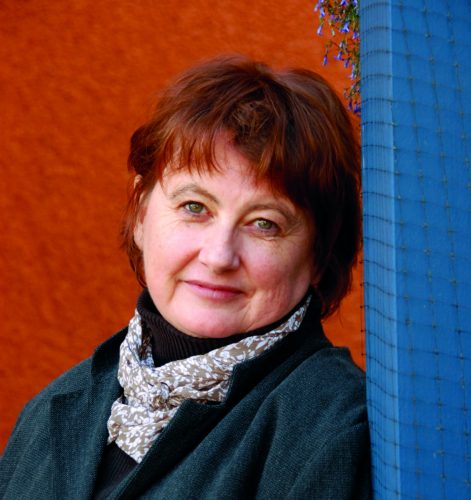 Jody Farrell has more than 25 years experience as an editor and writer for newspapers, magazines, and education publications. She loves writing profiles of interesting people, many of whom happen to be artists.